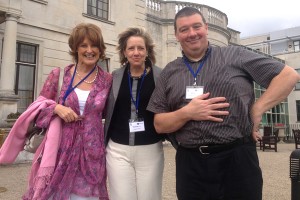 I was delighted to spend time in Dublin last month working on Team Emotional Intelligence with Vanessa Druskat, co-developer of the Group Emotional Intelligence concept in 2001 and Geetu Bharwaney of eiworld. We did some intense work on the application of Team Emotional Intelligence for the benefit of organisational teams. Vanessa is an Associate Professor of Organizational Behavior at the University of New Hampshire and I enjoyed working with her and gaining further insights into a topic which I have been very interested in since it was introduced to me back in 2008 when I was lecturing in Kemmy Business School at the University of Limerick.

An Emotionally Intelligent team is not the same as a Team with Emotionally Intelligent individuals and brings different if overlapping benefits. The Team is considered as an organism in itself and development is structured on the team being a self organising system – dictating the norms of operation, understanding and co-operation. This is the area of Team Emotional Intelligence.

No one would dispute the importance of making teams work more effectively. But most research about how to do so has focused on identifying the task processes that distinguish the most successful teams—that is, specifying the need for cooperation, participation, commitment to goals, and so forth – the key tenets of Team Emotional Intelligence. The assumption seems to be that, once identified, these processes can simply be imitated by other teams, with similar effect. It’s not true.

The real source of a great team’s success lies in the fundamental conditions that allow effective task processes to emerge—and that cause members to engage in them wholeheartedly.

Three conditions are essential to a group’s effectiveness: trust among members, a sense of group identity, and a sense of group efficacy. When these conditions are absent, going through the motions of cooperating and participating is still possible. But the team will not be as effective as it could be, because members will choose to hold back rather than fully engage. To be most effective, the team needs to create emotionally intelligent norms—the attitudes and behaviors that eventually become habits—that support behaviors for building trust, group identity, and group efficacy.

A model for positive change will always contain the most important types of norms a group can create to enhance its emotional intelligence. Teams, like all groups, operate according to such norms. By working to establish norms for emotional awareness and regulation at all levels of interaction, teams can build the solid foundation of trust, group identity, and group efficacy they need for true cooperation and collaboration—and high performance overall.

As an Emotional Intelligence, Leadership and Teamwork practitioner I have been working with the Druskat and Wolff model for a number of years but this work added clarity and precision to the model and allows Organisations to leverage the performance advantages it brings. Think of the benefits to Project Teams, Management Teams and Leadership Teams if their performance can be improved 25% above normally functioning teams.