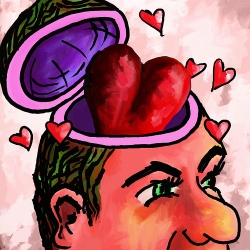 So what is emotional intelligence?

‘Emotional Intelligence is a way of recognising, understanding, and choosing how we think, feel, and act. It shapes our interactions with others and our understanding of ourselves. It defines how and what we learn; it allows us to set priorities; it determines the majority of our daily actions. Research suggests it is responsible for as much as 80% of the “success” in our lives.’

‘It is very important to understand that emotional intelligence is not the opposite of intelligence, it is not the triumph of heart over head — it is the unique intersection of both.’

If we combine these definitions we can infer that when we develop and utilise our capacity for Emotional Intelligence we increase our opportunity for success and integrate our heart and our head which enables us to deal with any given situation in a more comprehensive manner. It also encourages the integration of our conscious and unconscious minds which results in a more congruent and balanced approach to life.

In our experience of coaching and developing CEO’s, Directors and Senior Managers we often find that the key blockage to their sustainable success is their difficulty in achieving this integration. This can isolate parts of the workforce.

In addition like tends to attract like, so if there is a leader in the business who spends most of their time in their heads then they will tend to ‘attract’ similar people to them. The same applies to those leaders who come from their heart as they will also ‘attract’ similarly biased people.

For leaders a well developed degree of emotional intelligence is fundamental for success. Think about it:

‘Who is more likely to be successful, a leader who berates and shouts at the team when under stress, or a leader who remains in control, is calm and takes the time to review and understand a situation in a calm manner?’

To ensure that the maximum numbers of people are ‘attracted’ to you as a leader it is essential that you are able to integrate your mind and heart to project a balanced personality.

This then is the relationship between Emotional Intelligence (EQ) and Leadership. Those leaders with a more highly developed EQ will by definition appeal to a wider audience and as such will tend to be more effective as more followers will commit to and support them.

These key aspects are as follows:

The degree to which leaders manage these aspects will determine the level of their own emotional intelligence. So, let’s look at each element in more detail and examine how you can grow as a leader.

The more self-aware you are the more you will understand the impact your own emotions and actions will have on those around you. Those with a higher level of self awareness will be aware of their own strengths and weaknesses and will also behave with a degree of humility.

From self awareness comes the innate ability to regulate your behaviour and effectively get in front of your own instinctive responses. This will allow you to think before you act and thus have the head and heart to work together in a joined up and integrated manner. There are several techniques for achieving this.

This change in behaviour increases levels of self confidence and self assurance and as a result drives up self motivation. Leaders who are self motivated will work consistently towards their vision and will set themselves very high standards with regard to the quality of the work they produce.

The delivery of this work will often rely on other people, either within the immediate team or outside of it. In order for a leader to engage with others in an effective, productive and meaningful way demands that they work with empathy. An empathetic leader will be able to put themselves in another person’s position or situation. They will be able to deliver effective feedback as a result and will show up as a good listener.

In many ways the ability to empathise is about developing your social skills. Leaders who develop high levels of social skills are generally effective communicators. They will listen to good and bad news alike and will engage with their teams to enlist support and will raise response potential and create a real ‘buzz’ in the work place.

In this type of culture change is managed effectively and conflict is resolved in an adult manner. Emotionally intelligent leaders relish change and are not prepared to sit back and have everyone else do the work for them.

They lead by example and demonstrate industry, effective relationships and communication as well as encouraging and enthusing their direct reports.

To sum up, leaders must have a sound awareness of their emotions and how the way in which those emotions are enacted will affect their teams. Tuning into and growing your emotional intelligence will help you excel even more in the future.