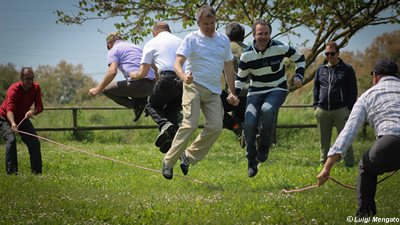 High performance teams go beyond roles and goals. Anyone who has been part of a great team knows this. They know there is something intangible there. There is something at the root of it. Something which bonds the team together and empowers it.

Those who know sports teams, and those who play with these teams feel something in it greater than themselves, an us and them, an instinctual thing. There is something there worth making the sacrifice for, putting your physical well being at risk for. It’s tribal. It’s family. It’s engrained. It leads to the whole being greater than the sum of its parts. It means when someone makes a mistake, or a weaker member needs help, it’s there. Action is taken. WE succeed or WE do not succeed – together. These teams communicate, they adapt, they work together, they overcome obstacles together.

The best sports team leaders are those who would go through a brick wall for the team. Sometimes they do not speak or hardly at all they just do things. They inspire by being first to the danger, first to sacrifice, first to training. They are the sort of people you want in the trenches with you because you can trust them to cover you. To watch your back. Many times they are not the best player, but they are first on the team sheet. A first among equals. The guys you look to for inspiration when the going gets tough.

Someone once said there is no “I” in team and some smart-alec pointed out there is an “M E” … We can spot those who are part of the team but not of the teamwork. We know them. They stand apart. They can be driven by ego or selfish aims BUT they can also be driven apart when cliques form, when they don’t feel included in decisions or when they don’t feel empowered. Many teams assume they communicate enough, listen enough, provide enough autonomy to members but they often don’t. Disenfranchisement or disillusionment occurs.

In organisational teams we often do not generate these kinds of bonds, except perhaps over time. We should particularly for teams on longer projects with a significant budget. We know the roles and responsibilities but then so does a team numbered 1 to 15 or 1 to 11. What makes them effective is teamwork.

What make them great is a team identity, trust, communication, autonomy and alignment with the greater vision. Team Emotional Intelligence theory (Druskatt and Wolff) calls it Social Capital – which, when improved can effect a 25% improvement in performance – for teams who are already performing with average scores.

The team members know who they are, who they represent and what they are trying to achieve. They serve the higher purpose rather than their own purpose. Yes they know the goals, but they are also clear on the why of the goals. They work with their fellow team members, supporting the weaker ones and generating loyalty and engagement.

We can recognise from the talk within the team how successful they are likely to be. It’s not about being positive all the time but on understanding what outside control of the team, understanding that set-backs are temporary and specific. A famous study by Martin Seligman of American baseball teams monitored the language used after games in the media engagement to predict success. He suggested what he heard in these discussions could predict success. He also looked for more about a focus on WE rather than I and an ability to puts losses or problems in context. He then bet against the spread to prove his point. He won.

Great teams are driven by peer pressure to perform not their bosses. It’s about not letting down the other people on the team. At the end of that incredible movieBlack Hawk Down – one of the incredibly talented, effective and brave rangers turns to his buddy and says – When I go home people’ll ask me, “Hey Hoot, why do you do it man? What, you some kinda war junkie?” You know what I’ll say? I won’t say a goddamn word. Why? They won’t understand. They won’t understand why we do it. They won’t understand that it’s about the men next to you, and that’s it. That’s all it is.”