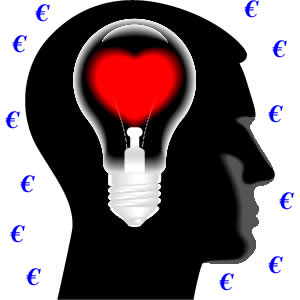 When it comes to achieving career success, emotional intelligence probably isn’t the first trait that jumps to mind. Particularly in Silicon Valley, where technical, intrapersonal skills are so celebrated that industry leaders are increasingly self-diagnosing themselves as autistic, the ability to decipher other peoples’ emotions is often dismissed as a fringe benefit.

But a new study published in The Journal of Organizational Behaviorsuggests the opposite: Emotional intelligence is a skill that, quite literally, pays. According to the paper, employees who are better at reading their coworkers’ emotions make more money than their less emotionally perceptive peers.

To gauge emotional intelligence, the researchers showed 142 study participants – all working adults, holding various level-positions in a broad range of jobs – a collection of images and voice recordings, and asked that they pinpoint the emotion being expressed in each case. “On average, the participants succeeded in 77 percent of the cases,” Gerhard Blickle, the study’s lead author, said in a press release. Participants who correctly identified 87 percent of cases were deemed good at recognizing emotions, while those that identified more than 90 percent were considered very good. Meanwhile, those that correctly identified less than 60 percent received low marks for emotional intelligence.

Next, the researchers asked one colleague along with one supervisor to rate each participant’s social astuteness on scale from 1 (strongly disagree) to 7 (strongly agree). Sample statements included: “She always seems to instinctively know the right things to say or do to influence others” and “People believe he is sincere in what he says and does.” Participants who received high marks on the emotions test were perceived as more socially skilled by their co-workers than those who registered lower scores, and even after controlling for factors such as gender, age, weekly working hours and hierarchical position, the researchers found that they also tended to make significantly more money.

In other words, emotional intelligence is a prerequisite for wielding social influence, a skill that, in turn, is important for successfully navigating work dynamics to achieve career success as well as a higher paycheck, says Yongmei Liu, a professor at Illinois State University and one of the study’s co-authors.

Interestingly, while emotional intelligence has a warm and fuzzy ring to it, the ability to easily and accurately decipher others’ emotions doesn’t necessarily make you more empathetic – it just makes you adroit at navigating the social playing field. Like any skill, says Liu “people can use it for good or evil.”

While the study did not examine various career contexts, it makes intuitive sense that emotional intelligence is more valuable in some jobs than it is in others. For example in positions that require a lot of social interaction and/or where there are fewer objective performance indicators, emotional intelligence is likely very important, says Liu.

In fact, the researchers conclude, more emphasis should be placed on emotional intelligence when selecting managers, a role that typically requires a large amount of interaction with employees. “Often we hear managers speak of understanding and esteem,” Blickle said, “but when we look at their management behavior, we realize that they have neither.”